Marvel comics used to have a very fun little set of short stories, called “What if …?” where parallel universes were explored, what might have happened if certain circumstances were different, like “What if the Fantastic Four got different powers?” or “What if someone else besides Spider-Man had been bitten by the radioactive spider?” or “What if Dr. Doom had become a hero?” 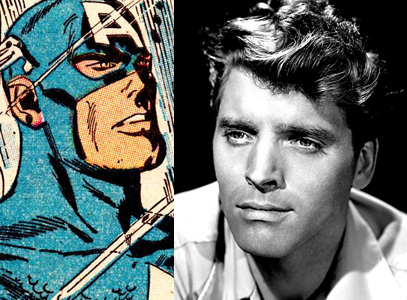 Iron Man – the insouciant charm and bravado of Errol Flynn (and for maximum electricity we’ll have the wonderful Olivia de Havilland as Pepper Potts) – can’t you imagine Flynn and Lancaster arguing? 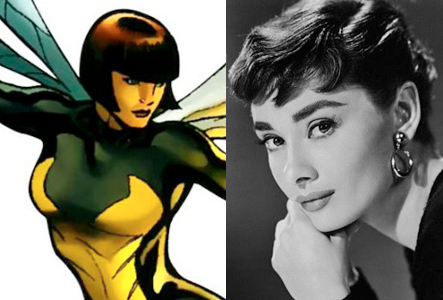 The Hulk – utilizing two sides of the Method coin, the sweaty nervous intelligence of Montgomery Clift for Bruce Banner and the glorious id of Marlon Brando for the Hulk! 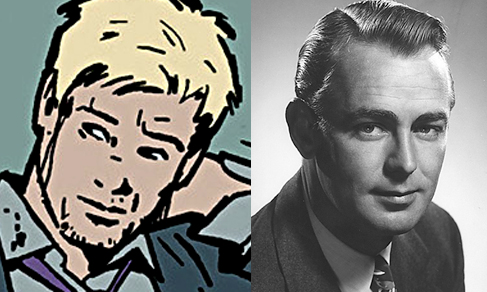 Hawkeye – the heavy past and small man’s bolshiness of Alan Ladd. 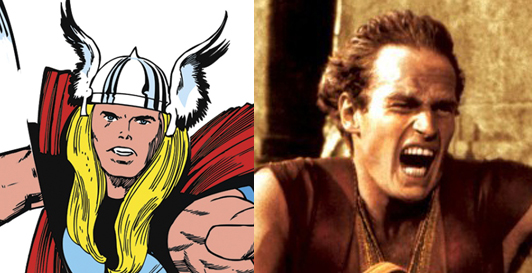 Thor – the blood-and-thunder muscles and imperious self-regard of Charlton Heston. 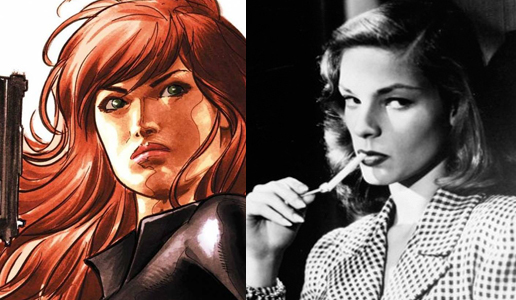 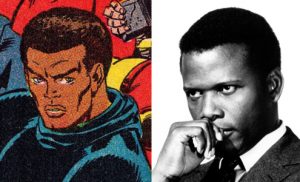 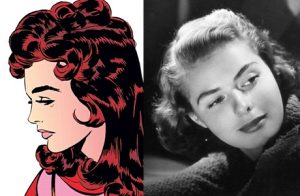 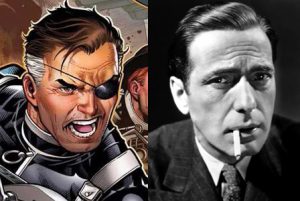 Nick Fury – the snarling experienced weariness of Humphrey Bogart (wouldn’t he look great in an eye-patch?) 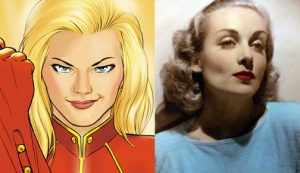 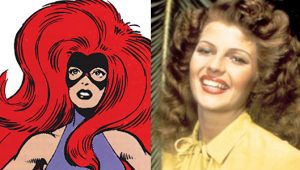 Medusa – the no-nonsense spiritedness (and terrific hair) of Rita Hayworth.

For villains, we’ll have the German mania of Peter Lorre as Red Skull; for the Enchantress, the slow-motion shallow gorgeousness of Veronica Lake …

… and delighted to be playing a villain, the undeniable old-world charm and fun of Cary Grant as Loki! And since we’ll probably need Thanos, the otherworldly voice and brutal danger of Anthony Quinn. 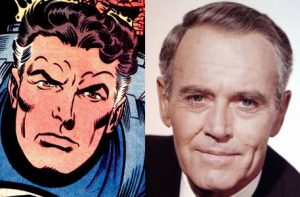 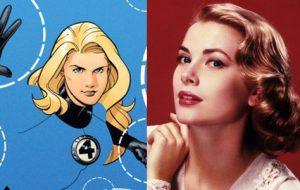 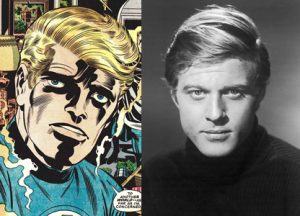 Human Torch – the hothead urgency yet integrity of a young Robert Redford. 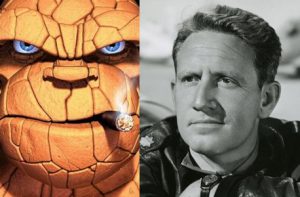 The Thing/Ben Grimm – the grouchy urban charm of Spencer Tracy.

For villains, Doctor Doom – the rage and ambition barely bound down by intelligence and manners of Basil Rathbone, and the godly might of Orson Welles is the only man for Galactus. 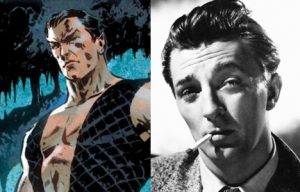 And for additional fun, let’s throw in Namor – with the husky manliness and rotten temper of Robert Mitchum. 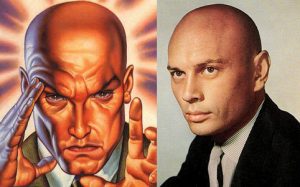 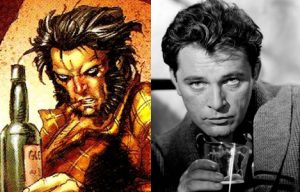 Cyclops and Jean Grey – the schoolboy diligence and good soul of Paul Newman (sorry to hide those blue eyes) and the edgy womanly smarts of Katherine Hepburn. 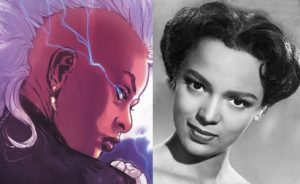 Storm – the hard-won respect and queenly power of Dorothy Dandridge. 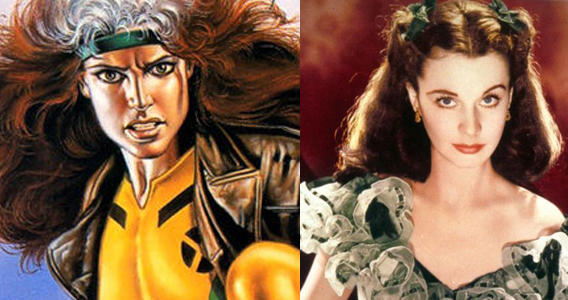 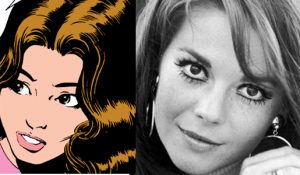 Kitty Pryde – the bullish immaturity and air of doom of Natalie Wood. 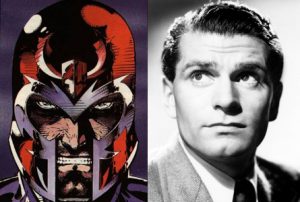 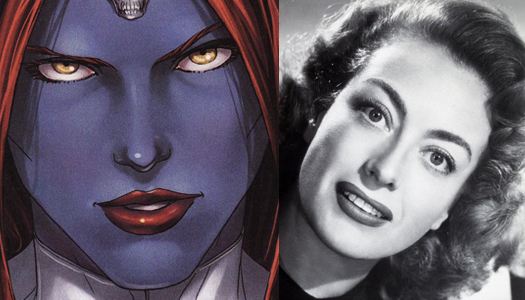 Mystique – the terrifying glare and high-necked militance of Joan Crawford.

And riding solo around Manhattan: 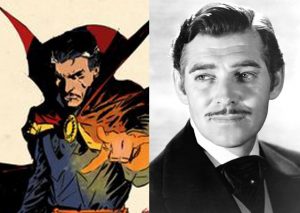 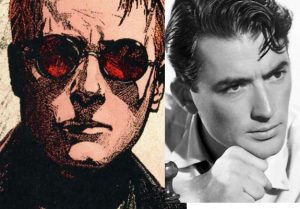 Daredevil – the integrous guilt and man-about-town elegance (and top-notch lawyering) of Gregory Peck, plus:

the aristocratic fierceness and lush seductiveness of Elizabeth Taylor as Elektra, the snarling danger of a young Clint Eastwood as Bullseye, and for the The Kingpin, the villanous fat-man string-pulling of Sydney Greenstreet …

… and we’ll throw in the jaunty clumsiness of Mickey Rooney as Foggy Nelson and the brittle attractiveness of Susan Hayward as Karen Page. 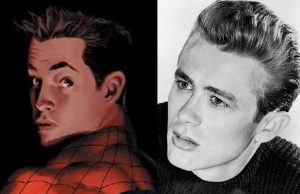 Spider-Man – me!!! (I did say it was a parallel universe … and I’d be such great casting for Peter Parker) … oh, allright, the deep-twisted worry and snappy wit of James Dean.

Mary-Jane – the fresh-talking scarlet gorgeousness of Maureen O’Hara; Gwen Stacy – the spotless innocence of Sandra Dee; and The Black Cat – the voluptuous mischief and dangerous neediness of Marilyn Monroe. 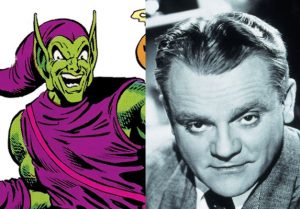 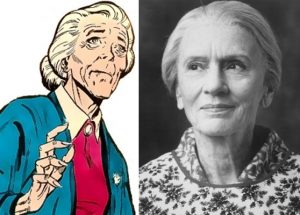 And finally, a slight cheat but perfection in casting: Aunt May – the prim knowingness of Jessica Tandy.