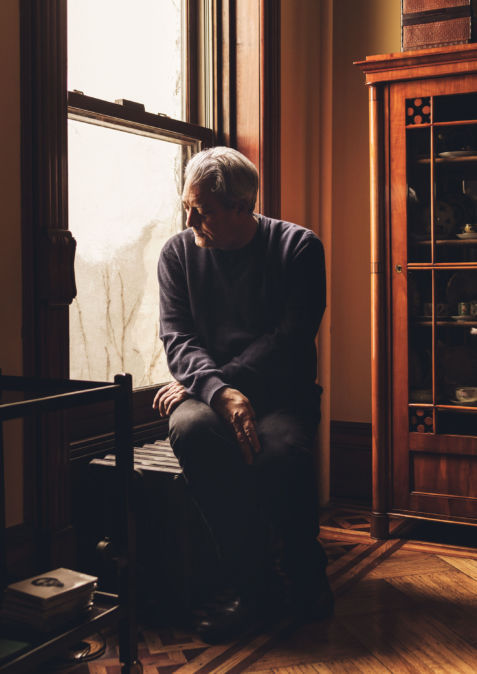 Author, Auster: My Love for the Novelist Paul Auster – by Paul A.

I’m currently on page 676 of Paul Auster’s latest novel, the 866-page opus 4 3 2 1. And I have to say – each page is bliss. I find myself smiling a lot, occasionally chuckling gleefully, and even a couple of times on the edge of tears. I come back to the book each night like an old friend I am delighted to see again. Which makes sense – because Paul Auster is my favourite modern novelist by a country mile, and one I always return to with anticipation.

I was first introduced to him by my mum. One day at the library, she handed me a copy of Moon Palace, and said, “I think you might like this.” (She never does that with books. With shirts yes, but this was unusual.) I still don’t know quite why she thought I would like it, but I tried it. And fell immediately in love, with Auster’s mysterious, affectionate, spell-binding tale of Marco Stanley Fogg’s journey through the American twentieth century. That was the last Auster book I read from the library. After that, it was straight to the bookshop to read more. I gobbled them up – starting with his acknowledged classic trio of short dream-like detective novellas, The New York Trilogy. I burned through his novels – it would be impossible to pick favourites, but some I just loved: The Book of Illusions, his tale of a grieving professor who finds meaning in rediscovering a lost silent comedian; Timbuktu, his delightful novel narrated by Mr. Bones, a dog; The Music of Chance, his twisting, tragic tale of the dangers of gambling with your life (which was made into a splendid little movie with Mandy Patinkin and James Spader); and Mr. Vertigo, his wonderful story of a young orphan who learns to fly … and the dark dangers of the world of entertainment.

When I’d read all his novels heretofore published, and was awaiting his new one, I found myself trying his prose … and finding it equally human and absorbing. His tales of growing up in New Jersey, of near starvation poverty in Paris translating poems and attempting to be a writer, and his lessons in life becoming a father, trying out being a film-maker, aging and learning, in books like Hand to Mouth, The Red Notebook, and more recently Winter Journal. His published letters, with fellow writer, J. M. Coetzee, comparing life in South Africa and Brooklyn are a joy; the collection of stories of coincidence collected by the public radio station NPR from its listeners that he edits, True Tales of American Life, reads like a myriad of one-page Auster adventures; and even his screenplays, a form normally sluggish and cold to read, burst with imagination and playfulness.

Did the fact that with my middle name being Andrew, he and I were both Paul A., impact my interest in him? No doubt it did, and it’s the kind of play on words and names that he loves. I initially mis-pronounced his surname as “austere”, which I think he’d quite like. Since he’s both that and not that. His writing is clean and clear, uncluttered, never trying to bewilder us with clever language (unlike Joyce, one of his heroes). But his writing is also warm, funny, silly, intrigued, flawed, meandering and humane – never cold. Some people have told me he is a postmodern novelist, but I find myself arguing with them, because he’s not cynical and clinical – yes, he’s playful, in ways I’ll talk about below, but it’s never about form, it’s never cruel, desolate, giving up on us. It’s always sincere and compassionate – often whimsical. It’s full of love of life – I’ve personally always found Auster’s writing to be much more like Dickens than like Beckett.

I’ve been in the same room as him three times, all in New York, and I can say, in person he comes across as brave, curious, generous and humble, yet with a robust self belief. Though I’ve never spoken to him. The first time, he was reading from his new novel, Invisible, at the 92nd Street Y. He started to read, and I was surprised. Based on his author photo (Auster the author, mysterious dark eyes in a black polo neck) and his sensitive writing, I expected a gentle, light, bohemian voice. Instead, Auster had the pleasing smoky deep tones of a New Jersey truck driver. Then I went from surprised to astonished – he chose to read, in front of hundreds of people, a passage from the book that was essentially a long graphic sex scene, indeed an incestuous one, and I remember thinking, even as an actor who thought he was decently courageous, I would have struggled to do it. But it wasn’t to shock – he read with great brave calm, and it facilitated a powerful discussion afterwards about a key idea in the book – how much of this was fantasy, and how much we mangle memory in our lives. I was wowed – this man’s skill was only matched by his bravery.

The second time, I saw him speak at the Strand Bookstore, along with Edward Albee, about the influence of Samuel Beckett on their work. Kind of a dream come true for this actor! It was joyous to see how much he loved plays, even though he doesn’t write them – at times, he seemed to like them more than Albee! But what I was struck by was his humility – and his feeling of debt and awe to other writers, from Shakespeare onwards.

Finally, I went to see an on-stage adaptation of City of Glass, one of The New York Trilogy, at a tiny theatre in Greenwich Village. It was quite good – a little avant-garde artsy for my taste, but it captured theatrically a lot of the mystery about identity in the book. Then suddenly my evening became like a chapter … in a Paul Auster book. I heard a man laugh heartily, in a lovely warm guffaw, at many of the comic moments in the play. It sounded vaguely familiar … could it be … nah. Then, as I was leaving the theatre after the show, there walking in the lobby right in front of me … is Paul Auster. And I think, “Gosh, I should go up and talk to him. He’d love the coincidence of this, he just happens to be here the night I come, his huge fan, Paul A., Paul an Actor with Paul the Author …” when I noticed the writer-director of the play joining him, and starting to talk about the show, and Auster was warmly, generously congratulating him on the piece, and I realized – this was his moment and I didn’t want to disturb it. Maybe I should have held on, found a way to say hello, but this felt like the right thing in that Paul Auster moment too, as I walked off into the New York night, marvelling at life’s incredible capacity for meaningful chance.

But back to the books. What do I find so special about his writing? Well, besides his ability to create intriguing narratives, to develop and reveal character, and to examine big themes in his stories, there are a few special things that are particularly Paul Auster that I love:

I love how he makes lists.

I love his enchantment with games, both the intricacies and joys of sports, particularly baseball, but also games he makes up that his characters play, like Screwdriver Darts. (I recently was cleaning out some old boxes of papers, and found I had written down the complete rules to Playing Card Baseball that Auster created in one of his books.)

I love his fascination with chance and coincidence. Life is always full of strange twists of fate in Auster’s world, the gods are at play, the world is small and ingenious and deeply mysterious. And bets are always dangerous in a Paul Auster novel.

I love how he’s intrigued by names, and the power of names. Of the name Paul. Of getting nicknames. Of how names are changed, like immigrant surnames anglicized at Ellis Island. Of anagrams. Of matching names. Of friends with similar sounding names. Of choosing pen names and aliases. Of initials. And of the titles of books and movies and stories.

I love his affection for the very poetry of words – not just in their arrangement but in individual words alone – what they sound like, where they come from, what they look like. He plays with words.

I love his adoration of books, and of stories, and of stories within stories. His regard for the masters like Cervantes, Kafka and Dickens, and his fascination with the very act of writing, including the choice of pencils and notebooks used, of what desk to sit at and where, and of typewriters as heavy hearty old friends and great gifts. His awe at the very process of publishing and how bookshops are magical sanctums of quiet possibility.

I love his delight in movies and movie-going, of old black-and-white Hollywood from spinning noir to Laurel and Hardy screwball slapstick, and of slow-moving French movies. And of the different qualities of cinemas and being in them, from the Thalia in Manhattan to the Cinematheque in Paris. And of the mischievous truancy of a matinee on your own.

I love how his women are smart, adventurous, fierce and challenging, often mysterious, but with a delicate heartbreak (and romance-stopping heart-brake) to them. How he never underestimates the capacity of older people to still have strivings, dreams unfulfilled and to make major mistakes. And how he brings together little gangs of aspiring kooks, wanderers and lost souls.

I love how he nails the essence of places, especially New York and Paris. Both cities’ capacity to be foreboding from the outside and sweetly delicious from the inside. The quality of walking straight blocks in Manhattan and winding cobbles in Paris. Reliable diners in Brooklyn and bustling restaurants in Saint Germain. The French capacity for disdain and generosity, of New Yorkers’ grinding determination and secret flights of fancy.

I love how fascinated he is by the structure of a day. I find myself jealous of his characters and the routines they build. And how he sees the value in repetition, and in repetitive work and of deep delving, whether writing a book or building a wall.

I love his bad jokes. His love of lame puns and punchlines. Of catchphrases. Of the joy in people’s dumb attempts at humour.

And I love how much he loves people. That is clear in every word, every line, every page, every punch of his typewriter keys, his huge heart for all kinds of people amid the incomprehensible totality of life, and the worthwhile effort of writing to understand … bits of it.

Most of all, he is so paulfyl. I mean playful. I think that’s a pretty great quality – in art and life.

Thanks, Paul. From Paul.