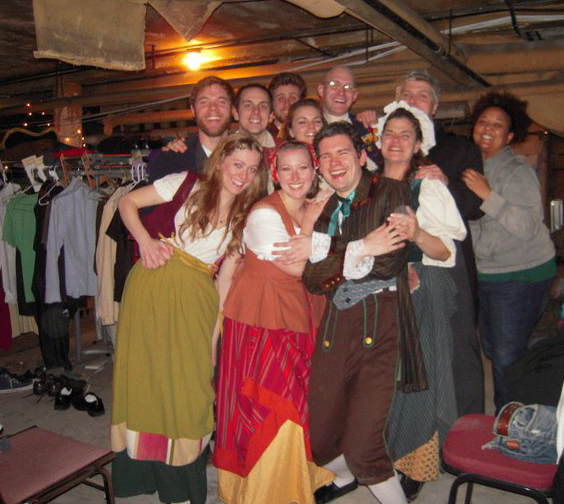 15 Fabulous Firsts When You’re An Actor in a Play

When you’re an actor in a play, there’s a bunch of first times during the course of the production, juicy first moments, that happen each time you do a show, that are fabulous milestones and a special part of the joy of performing. Each feels lovely but a little different – each one makes you tingle, and you’d miss each desperately if it didn’t happen. Here’s a few of them:

The first time in the audition room that you realize it’s going well. When you step outside yourself and realize you’re playing and having fun and creating. Jeez, it’s almost like a rehearsal already! You’ve got ideas, the director is laughing at your jokes, you feel at home – wait a second. Yeah, that first time you’re all of a sudden pretty sure (but not 100% sure) that you are right for this … and (whisper it) they are gonna cast you. (Oh yeah, baby, that’s right – you’re looking at a proper actor here … Focus! Keep doing what you’re doing! And relish suddenly, for once, being … the one.)

The first time they tell you you got the gig. Usually by email these days but 100 times better by phone – that way you can’t help but hear the bright smile in the producer or casting director’s voice. (They have to deliver bad news so often, this is really fun for them too.) We’d like to offer you the role of … Oooh, that’s so good, you almost forget to say “yes.” The way your heart surges at the hammer-and-tongs excitement of a new creative journey. And you float for the rest of the day. Bad drivers don’t bother you. You flirt with shop assistants. You take out the garbage with aplomb. Life – is – good. (I did say yes, didn’t I?)

The first time you sit down with the script, a sharp pencil and a cup of coffee. You feel like an actor – because you are one. You got a job to do. You’re gonna come in rehearsal Day One ready. It feels like good work. Doing your homework. Making notes. Finding beats. Seeing patterns. Noting questions. Imagination. Character study. Fleshing out the words. What will inspire you? What research books might you need to read? What obscure point of reference will make it click? Objective. Superobjective. Status. Secrets. Imagined body. Key Values. Moments Before. All that juice for your engine. All that detective work. And reading that script again. And again. And again. (Oh, and yeah, of course, highlighting your lines …)

The first time you do a full read-through. The first day of rehearsal. You’ve rushed to get there because you’ve never been to this space before … so you’re half an hour early … so you go get a cappuccino … and swan in with it … and everybody is already there chatting. And they have tea! And it’s the first time you see the other cast members and put faces to roles you’ve been imagining – and they’re not what you thought, but then suddenly they’re much better than what your little brain could imagine, much more colourful and deep and … fleshy. And you’re rapidly introduced to all these lovely and brilliant designers and producers and front-of-house you won’t see again for ages, and it’s a bit dizzying (so many names!), and you’re making very nice jokes and comments about the weather that won’t offend anyone … And finally you get to sit at a bunch of tables, assembled into a big square, and you say your first line aloud and another actor replies with theirs … and the lines chime like two notes off different wine glasses – delicate but ready for more. You have begun.

The first time in rehearsals you manage a full run-through of the show, off-book – without calling for “line.” Yowzahhh, touchdown, the relief! It’s like being a dog suddenly let off a leash. It’s like letting go of your baby blanket. It’s like a baby chick jumping off a cliff … and flying. It doesn’t mean you’ll be able to do it next time … but you’ve done it once, so you can do it. And that’s all you need right now. Don’t go burning the script … but you can start really believin.’ (Even though you did mangle that one line in Act 2. But nobody noticed. Except your stage manager, who gives you that look. Thank God you brought him Jaffa Cakes last week).

The first time you put on your costume. The designer comes in, maybe she’s shown you drawings but now the real thing is in her hands, and it’s coming your way, and it’s got texture and pattern and smell and weight. For me, primarily, it’s the shoes – the feel on your feet, how it changes your walk: industrial boots? shiny spats? awful moccasins? But I am always told, when a coat lands on my shoulders, my character deepens. It’s when you really start to breathe like your character. Sweat like your character. Ache like your character. It’s so sweet.

The first time you walk on the actual stage you’ll be performing on. You leave that rehearsal room with its taped-markings on the floor for “rooms” and “doors,” and you are in a theatre. Lights. Wings. Seats. The legendary smell of the grease-paint. An arena awaiting an audience. Gosh, it is possible to have electricity running through wooden planks? To have stardust jingling at your feet as you take your first steps on that stage? Practising moves … gently. Touching furniture … carefully. And knowing now it’s a countdown to showtime. (Now where’s my dressing room?)

The first time you know which chair in the dressing room is yours. So you can put your bag down. See how far it is to the clothes-rack (and the loo). Unpack your make-up, your water bottle, your tea-bags. And most importantly – start sticking your inspirational postcards around the mirror, and making it your second home. (Even if just for a week).

The first time you get to be in the theatre alone. Maybe you arrived early to warm-up, maybe everyone else is having a meeting in that other room, maybe you just woke up from a nap and found the place empty. But right now it’s all yours. The air is cool, even a touch frigid. Your footsteps suddenly echo. You walk around stretching out your arms, caressing the velvet of the seats, sitting in the very back row. Dare you try a line in the space? You do, and it rings. It resounds around the room. God, theatres are a wonder. This is your church, and soon you will do your soul’s work. But take one more minute to bask in the silence, the space, the stillness – the anticipation. (Before that rabble come back in making fart jokes).

The first time you hear the hub-a-bub of a big crowd arriving in to see the show. Maybe you’re being told to get off the stage by your overstretched stage manager, but you can hear the sounds of the lobby through a crack in the door. Maybe you’re in the dressing room hearing the overhead speaker of people taking their seats. Maybe you have to wait on stage before the show, and you’re peeking through the curtains. It’s PEOPLE! Coming to see the show. That’s why we do it, remember? Holy cow, we might have a full house? Are they normally this rowdy on a Thursday night? Wow, they are hungry for this. And that’s okay. They’re lucky. You’re ready to knock their socks off. (Do I need to pee one more time? Yeah. Just one more time).

The first time you step out into the lights in front of an audience. The crackle of it. You leave the safety of the wings, and suddenly they can see you. They’re looking at you. You’re in a show. Now. Now! NOW! Holy crap, your brain just went blank! No, I’m all good, I’m in the story, I’m the character now … and you’re breathing … and listening, living, being … and there’s your first cue … and you say your first line. It’s real! Hey, this is fun. You start moving around the stage, saying more lines, playing. And then you get your first laugh of the night. Your first gasp. Your first sigh. Hey this works! The audience is into it! You’re doing what you love. What could be better?

The first time you say your last line in the show … and you can hear a pin drop. The lights dip. And it’s still quiet for one delicious beat more … and then the applause lashes down like a sudden rainstorm. Genuine, joyous, relentless – and you bow with honour and admiration for the audience. You can’t help smiling, and they keep on clapping. Eventually, they let you go from their warm appreciative noisy embrace and you exit stage left, into the dark behind the flats, past that heavy muffled door and into the corridor … and you’re a little bit at a loss, wandering a little waywardly – for the first time in hours, you don’t know your next move. But then you stumble into the dressing room, and over the intercom you hear the audience laughing and quoting lines and saying how great that was, and you’re back in your purpose. Wow, we did it. (Now where’s the cold cream for this damn black mascara?)

The first drink on Opening Night. It’s been a long day’s work; the end of a long week of final rehearsals, tech, repetition, the stress of bringing it all home, each night crashing home to bed like a good soldier; hell, it’s been a long month all of a sudden. But that opening show is done, and done well, and that first clink of glasses with your cast and crew is like bells of gold, and that first sup of lush, celebratory, well-earned beer on your dry, harsh, work-worn throat, is like nectar.

The first time you get a really great review for the show in a newspaper. I’m just about old enough to remember when, if you stayed out drinking after opening night late enough, you could pick up the fresh-printed morning’s paper and scan for reviews. We all pretend we don’t care about the reviews – I don’t read them, man – and Lord knows, the baaaaad ones stay with us much longer – and in all reality they are just tomorrow’s fish-and-chips wrapping – but reading a glowing review of your performance in the cool morning air is a unique thrill.

The first time you overhear an audience member praising your performance, genuinely, delightedly, they just can’t help themselves – and you luckily overhear it, maybe passing in the lobby or on the street outside or in the pub next-door, so you know it’s not forced flattery. It’s just nice. Really nice. (But keep walking before they spot you!)

And you can’t wait for the next … first.