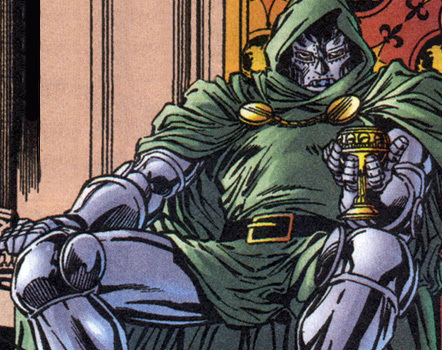 I am a longtime fan of Marvel superheroes. Anyone who knows me knows I’m a Spidey fanatic, but I also have a soft spot for the likes of Daredevil, the Thing, Iron Fist and Black Bolt. But maybe as much as any of them, I adore no super-villain more than Doctor Doom. I’ve always had a thing about him. He’s arrogant, super-smart, proactive, surprisingly honorable and deliciously snide. One Hallow’een I dressed up as him, with a Doom mask and a green towel around my shoulders, and proceeded to order my minions (i.e. my poor friends dressed like werewolves, ghosts and vampires) to go get Postman Pat chews for the glory of Latveria. There’s something about him that just makes him incomparable. Why?

Well, for a start, Victor Von Doom is a genius inventor, builds his own robots and doomsday machines and of course android replicas of himself. He’s a powerful sorceror, who combines demonic witchcraft, Tibetan monk disciplines and alien psionics – hey, his fallback if he ever gets murdered is to swap consciousness with a bystander. He’s pretty nifty in a fight, with his flying armour, forcefield and energy blasts, plus he’s not afraid to bring a gigantic gun along. And he runs his own country, a Bavarian-looking hamlet in Eastern Europe … somewhere.

Somehow his costume looks cool and elegant, even though it seems to combine King Arthur’s armour, the Man in the Iron Mask, Robin Hood’s green velvet and the gold disks of a particularly blingy rapper. 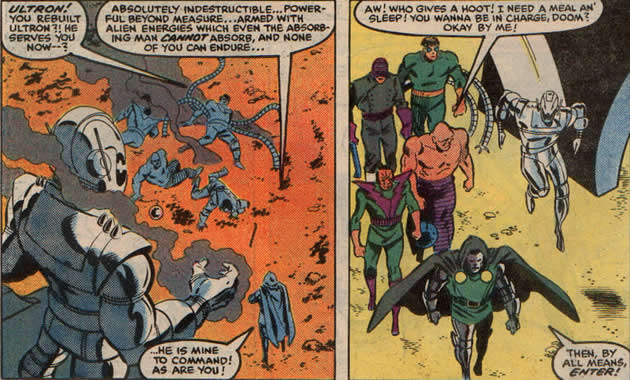 But what’s really great about Doom is his personality. He thinks 99% of people are idiots and likes to tell them so in big words, he’s an honorable king who is mannered and respectful, he’s a hurt soul – basically he’s a tragic hero.

Doom is psychologically fascinating. He records everything he says for posterity, so he monologues quite stupendously about himself in the 3rd person, like Richard III or Iago. He’s originally a poor gypsy, who only went in search of magical power to save his mother, a Romany witch who was captured by a demon. In a fiery explosion, his face was hideously scarred, so now he hides behind a mask. So Doom has a softer side (he still pines for his mum), an unfulfilled quest and his delusions of grandeur are countered with a shredding hidden fear of inferiority. And he’s pretty classy – he’s a man of his word and has a strict honor code – he will often walk away from an injured opponent. He is also a dad, who has to deal with a teenage son, Kristoff, who is a bit bonkers (or maybe just adolescent) and is clearly a lot of work for poor Daddy Doom. And his arch-rival Reed Richards just won’t admit Victor is the smarter one. It’s a lot to deal with. 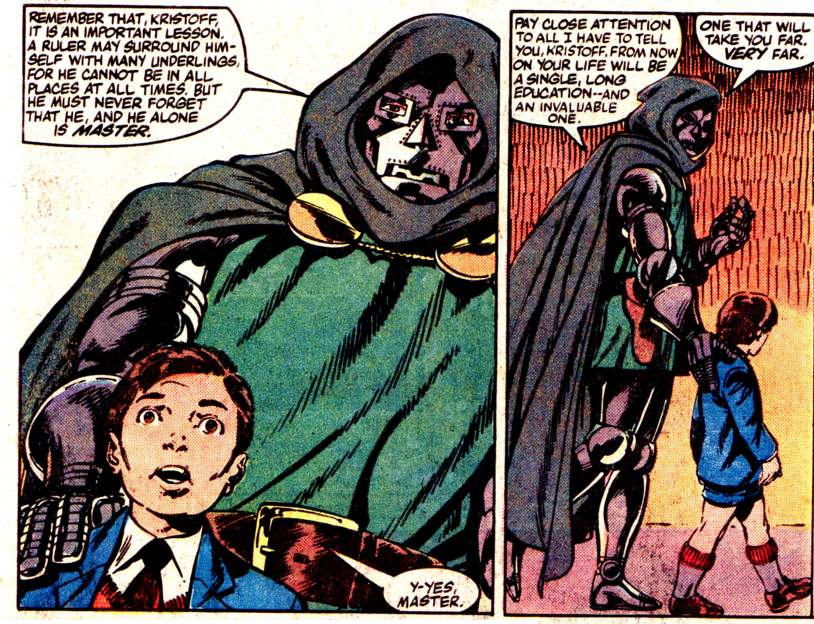 It’s great how Doom clearly finds dealing with other super-characters (heroes and villains) depressing. I think Doom spends a lot of time sighing behind that mask, dealing with nut-jobs like Doctor Octopus or big lugs like Ben Grimm. At least with Reed Richards, he can have an intelligent conversation. Before he vaporizes him.

I love this example of the paradox of Doom’s mind: in the original Secret Wars mini-series, Doom decides to try and take on a being of infinite power, the Beyonder, and somehow, through sheer force of will, manages to steal the Beyonder’s power. Then, with the ultimate power this most megalomaniacal of megalomaniacs has always craved, what is the first thing he does? He heals his own scarred face and shows it off to all the superheroes. Shortly thereafter he decides to wipe out the heroes, with a mighty bolt from the blue. All good. But then Doom’s self-doubt kicks in – he broods and keeps around a Fool figure called Klaw, who proceeds to nag Doom that he must want the heroes to come back and defeat him because he killed them with a melodramatic blast, which gives the tiniest chance that they might have survived, when he could easily have just changed reality so they never existed. Doom starts imagining that Captain America is about to come charging into his throne room, and proceeds to have a mental breakdown, enabling the Beyonder to steal his power back. What other super-villain combines cosmic nuttiness with that level of Shakespearean character flaws? 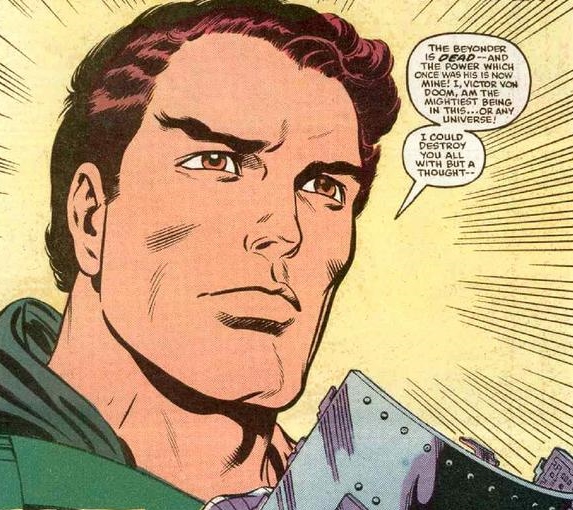 I think it is brilliant that even when Doom encounters himself from an alternate future, where he is now Kang, who has managed to conquer time, he somehow manages to always make Kang look like his peevish younger brother, and send him away with his tail between his legs. Doom: unlikely champion of the Power of Now?

Doom is a nice boss. Sure, he rules by fear, but the people of Latveria seem to have a pretty nice pastoral life, and Doom still lives there, amidst his countrymen, protecting them, not a tax exile in the Caymans or hanging with oligarchs in London.

And I’m pretty sure, before the face-scarring accident, Susan Storm (aka the Invisible Girl) totally fancied Doom. C’mon, Reed is a solid choice her mother approved, but Doom was brooding and foreign and sexy and you just know was much more fun with a beer in him than Reed. I’m pretty sure all that flirting she does with Namor the Sub-Mariner later on is just hangover from missed opportunities with Victor Von Doom. Just saying.

And by the way, there would be no Darth Vader without Doom. And while I love Ol’ Asthma Breath, Doom would never be a lackey to some crinkly old sorceror. And though we all interpret emotion in Vader’s blank hangdog mask, we know exactly what is going in Doom’s mighty eyes. 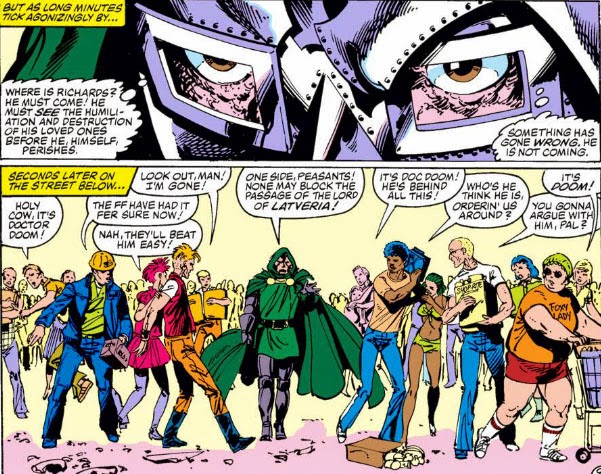 So as you can imagine, I was trepidatious when the Fantastic Four movie came out in 2005. But then I saw they’d cast Julian MacMahon as Doom, and I cheered. I’d adored him as self-absorbed plastic surgeon Christian Troy in the FX TV show Nip/Tuck – I bored friends with my constant pointing out of how smartly as an actor he found turning points in scenes. And he was Australian, so I figured he could do a nice Eastern European accent, or at least a burnished RP. But no, they made him AMERICAN!!! Nooooo! Which made no sense, and took away all his foreign regality and his natural conflict with Reed Richards’ very Kennedy-years USA optimism, along with many other logical elements of what makes Doom. It was a disaster – I’m surprised Doom didn’t leap out of the comics, and blow up 20th Century Fox.

But while the movies may never get Doom right, we’ll always have the comics. So let’s turn to page 1, where in wooded Latveria, the world’s greatest genius is hatching a plan … for ultimate power!