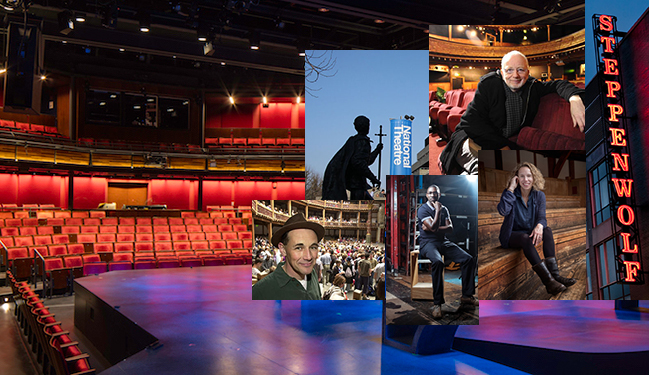 I am an actor who also runs a theatre company, and dreams of running a theatre. Now that really should be the most natural thing in the world – in theatre, actors give life to the stories, we engage with the shows every night, how they work, how audiences respond, what works in a venue, what works in a script. And it’s something that feels very right to me – while most actors are very happy to just act (which is great), there are some of us who want to take responsibility for the whole process, to ensure the overall quality of the audience’s experience, from choosing and developing scripts, to how punters encounter the show in its marketing and the feel of the lobby, to performing one of the roles each night. We are in good company, we actor-producers – we come in a direct line from William Shakespeare himself, who of course wrote his plays for his company the King’s Men to perform at the theatre they owned and operated, The Globe, and he acted in many of them.

But even when we started out our theatre company, AboutFACE, we felt we had to be very wary, careful and transparent as actor-producers, so as not to be seen as selfishly using the presentation of plays as mere vehicles for our own careers – that we might be accused of miscasting ourselves, or putting on poor plays for an audience to see, but that still held showy roles for us that an agent or casting director might come and see. And as young actors, of course, we wanted to attack good parts, and be noticed in them. And there’s nothing wrong with an actor putting on a show as a vehicle – most one-person shows are purely that, and good luck to them. And probably most theatre companies started by actors are about that in their first show.

But once you get to producing your second, third, fourth shows, that really disappears as motivation. You understand that the truest deepest result of putting on a play is the impact it has on an audience, and if you continue a theatre company, you have to choose what works best to achieve that – the play, when you put it on, who is your creative team? Putting on a play is much too much work – we always feel it is 90% grunt work for that final 10% of performance joy – and so you have to love the play and believe in its anticipated effect on a paying audience, otherwise when the going gets tough you’d walk away. You need to love the play.

Yet, even though we rigourously chose our plays, researching and reading a huge number of scripts, and only being willing to commit to producing shows all three of us as Co-Artistic Directors believed in, we still felt the need in our early days to audition for parts in our own shows! Once we hired the director, we insisted we read for parts in the play – to show we were worthy of them, and not weak links they were forced to include! Looking back, of course it was utter madness. (And terribly stressful). But we wanted to ensure that we were being fully integrous as producers.

Because we were also actors. And somehow, there was a suspicion about us being actor-producers. Instead of being actors being a strength – being highly aware, passionate, conscious and knowledgeable theatre storytellers – there was a subtext that as also producers, we were possibly just there for selfish reasons.

So when you looked at the landscape, the vast majority of those running theatre companies were, and are, directors. Some producers, but mostly directors. And yes, of course, directors attend to the overall play from the outside, they are the outside eye, so it is a natural fit. But the idea that a director might be choosing a play for a selfish show-off reason, such as to put on a flashy show with lots of noticeable auteur touches like a striking period relocation, a new framing device, blasting pop music and flashing lights, which does more to draw attention to the director than to serve the play, seems a lot less worthy of suspicion for some reason. Of course, most directors who are artistic directors are just like the actor-producers I spoke of: they are not driven by self-centred attention-seeking that tramples on a script and an audience’s need to experience it, they are using all their skills, love and dedication to put on the best show possible.

But as such, I see no reason why an actor cannot be just as suitable a choice to be the artistic director of a theatre, as a director.

And so, for inspiration for myself and any other budding actor-producers, here are 10 actors who have (and are) successfully running theatres:

One of my great role models, the bold Sir Larry never settled for just being a mighty actor, but always pushed to produce. From co-running the Old Vic in the 1940s, together with fellow actor Ralph Richardson and director John Burrell, and restoring it from post-war near-ruin into a highly respected company, to being an independent actor-manager in the 1950s, he went on to run the newly established Chichester Festival in 1961, before starting Britain’s National Theatre, running it for ten years, first at the Old Vic and then taking it into its current purpose-built home. And continuing to play major roles at those theatres throughout!

Another of my touchstones are the rough-hewn, stubbornly passionate actor-producers of Steppenwolf in Chicago. The company was started by actors Gary Sinise, Terry Kinney, and Jeff Perry in a suburban Unitarian church basement in 1974, and they would go on to run the company for decades in different iterations. Even today, as a stalwart in American theatre, the leadership of their actors ensemble is key to who they are and the work they do.

In Dublin, we have the prime example of MacLiammoir, who with Hilton Edwards (his partner, a fellow actor who he met in a touring company), set up the Gate Theatre in 1928. They innovatively presented the new plays that were shaking up the world abroad, like Ibsen, using modern design and forward thinking, building a theatre that today stands as one of Dublin’s Big Two, alongside the Abbey. Again, MacLiammoir continued to act in major roles throughout their lives running the theatre. (And of course, they gave the first professional gig to another mighty actor-producer, Orson Welles.)

Rylance, now practically the gold standard for theatre acting as well as an Oscar winner in film, was a much-regarded RSC actor but not a much-experienced director or producer when in 1995 he was chosen to be the first Artistic Director of the Globe in London. But he took the theatre to great heights in his ten-year reign, making it a much-beloved fixture in London’s Theatreland, when it could in that period easily have become a lame tourist re-enactment. He did so with immaculate leadership and first-hand knowledge both in his bold and muscular programming and in acting key roles in every season.

Best known to the wider world as the actor who played The Emperor in Star Wars, McDiarmid is a major theatre actor, and the recipient of both Olivier and Tony Awards. In 1990, alongside Jonathan Kent, he took the reigns of the Almeida theatre in London, and ran it for 20 years, during which time they built a reputation for boldly-chosen plays from around the world in an exciting environment, featuring top-quality actors in an intimate space, often featuring stars who would previously only have been seen in the West End.

The current director of the National actually began as an actor, including training at RADA, before diverting into directing, where of course he rose to award-winning prominence.

The current director of the Chichester Festival Theatre is a long-time and continuing actor, whose acting career has included Olivier-winning performances in Sondheim’s Merrily We Roll Along in 2001 and Sunday in the Park With George in 2006, as well as multiple roles at the RSC, National and Royal Court. His award-winning seven-year tenure at Sheffield Theatres showed his brilliant leadership (and led to talk of him running the National) and included a number of appearances on stage there, such as in Company, Cloud Nine and The Tempest. It’s worth noting how Sir William Castell, chair of Chichester’s board of trustees, said Evans had been chosen from “a very accomplished shortlist of candidates, but it was clear that Daniel’s breadth of experience as a director and actor makes him a brilliant fit … his passion for theatre is infectious”.

The new Artistic Director of the Young Vic, comes from his huge success running Baltimore’s Center Stage for 7 years. He arrived there primarily known as an actor and playwright. He had been working as an actor for a decade, most prominently for his role as paramedic Finlay Newton in TV’s Casualty, before becoming a writer and director.

We can go right up to today with this trend. The new artistic director of the Globe, starting in 2018, is a much-loved actor, who has very limited directing experience but a huge depth of acting experience, including an Olivier Award for Tribes and a range of roles with the RSC, National and Globe. But the Board of the Globe clearly understand that actors too know how to put on plays, and audiences are hugely excited to see what she will present.

And it’s not just at the established theatres. There are examples of actors saying they’ve had enough waiting around, and with great courage and hard work, set up new producing house theatre venues. One exciting example is Manchester’s Hope Mill Theatre, only established in the last two years but already building an audience and award-winning presence, and sending shows on to London. It’s set up and led by executive producer William Whelton and artistic director and programmer Joseph Houston – both actors. (And this trend is present in modern-day Dublin as well. Two of the most exciting new theatres in Dublin have been set up above pubs, co-led by actors, in Karl Shiels at Theatre Upstairs, and Andy Murray with Laura Dowdall at the Viking.)

So believe it, fellow actors: we can run theatres too …