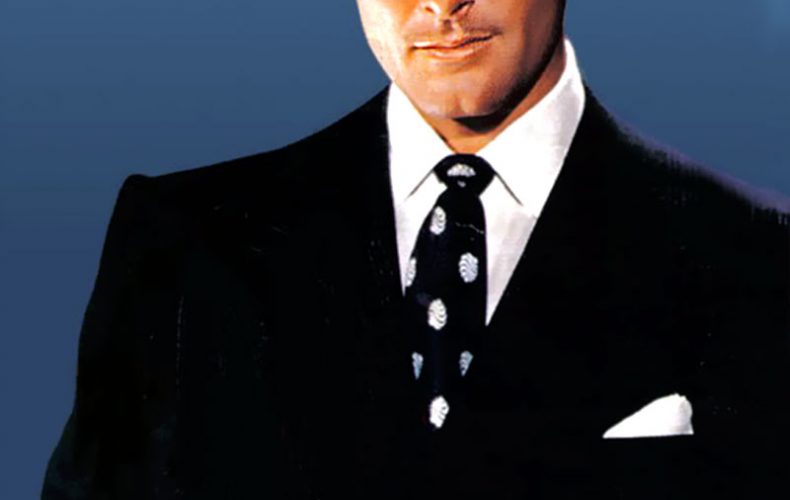 For some reason, when people talk about the great movie actors, they never mention Errol Flynn. They’re wrong but I think I know why. His reputation as the rascal, the “In Like Flynn” womanizer, the hard-partying drinker whose Hollywood Hills home was self-titled “Cirrhosis by the Sea,” the man who would title his cheeky memoirs “My Wicked, Wicked Ways,” goes before him, and at best people regard him as a good-looking chap, with a decent handle on a sword, who got lucky and had a great nightlife, occasionally turning up to play the same part in a bunch of swashbuckling hokum. Okay, he may not be as transformative with accents and physicality as Daniel Day-Lewis, as deep-digging as Robert De Niro or as plainly bold as Marlon Brando, but Errol’s a very fine storyteller, with surprising empathy and vulnerability, and there’s no film star who, when watching his movies, makes me smile more or who gets me as giddy at the prospect of a good time as when I see Errol Flynn appear in the starting credits. In short, he’s one of my faves, and I’d like to try and tell you why.

Errol is great with people. You could tell he loved them, their quirks, their bravado, their intelligence, their kindness, their challenging of him, and that comes across beautifully in all his relationships on film, whether with a long-time pal, an old lady or a child he’s just met, or even his enemy. He may often play a fighter, but after serving as a war correspondent, he was a true pacifist, and you can see his protectiveness of everyone. And of course, he’s charming – who can resist that raffish smile and that glint of fun in his eyes? And that laugh – who else in movies roars with delight like Errol, especially when he himself had been caught out or made a fool of? And is there any man more believable and invigorating as a true leader of men? I don’t mean Braveheart on a horse or Patton on a tank before a thousand troops, but the gutsy man taking charge of a little group, a lost squadron, a band of rebels, against impossible odds? He goes from the front, takes the first charge and the most dangerous job, and ensures that both no man is left behind and no-one feels left out. Errol plays devoted to his people better than anyone.

And with Errol, you get the bonus of his tremendous supporting cast at the old Warner Bros – the brilliant Alan Hale as his stout doughty best pal, Una O’Connor as Marion’s cheeky lady Bess, weary and pompous Donald Crisp – like seeing lovable old family members around the house. And of course, no story really works without a fearsome antagonist, as smart as our hero and ruthless as polished steel. With Errol, we get Basil Rathbone’s lethal and fuming Guy of Gisbourne, Claude Rains’ inviting and cunning King John, Raymond Massey’s cold-blooded snake Major Otto Baumeister. (And I’ll add to that the fact that many of Errol’s movies are directed by two of the great studio storytellers, Michael Curtiz and Raoul Walsh, which just helps to ensure we’re set for a tight-barrelled yarn, chock-full of intrigue, romance and adventure.)

And maybe he was a womanizer in real life, I don’t really know. But I’ll tell you what: Errol has terrific chemistry with all his leading ladies – he spars with them, he’s knocked over by them, he adores them, in a way modern actors could take a masterclass from. And of course, best of all, across eight movies, we get to watch Errol sparkle off the wondrous Olivia De Havilland. They’re electric and adorable together. They’re like the best married couple in movies, and we get to watch eight different “how did you guys meet?” stories. She’s feisty, gorgeous, smart, caring, brave, rebellious and capable – I dare you not to fall in love with the Maid Marion who goes from sharp-tongued sneering at Robin to running into a rebel’s inn to save him – and you can see Errol is bowled over by her every time. Their zinging verbal sparring is as tough a fight as any Errol has with his sword. Want heartbreak? Try watching their final ever scene together when Libby sends Custer off to certain death in They Died With Their Boots On. In every movie together, you can see there’s just the fire of attraction between them, that they adored each other, but they both try and hold on to their hats and keep their cool (and fail wonderfully). Is there a more fun couple in movies?

Errol has surprising depth. Watching him transform from selfish wastrel to self-sacrificing hero in Uncertain Glory is interestingly akin to Bogart in Casablanca (and what higher praise could we have than that?). In Dive Bomber, Errol shows his palpable smarts as a researcher into the effects of G-forces on pilots, leaving the heroics to Fred MacMurray. And though not one of his best films, watching Flynn deliberately hold back all his charm to play the stoic brutish Soames in The Forsyte Saga is fascinating.

And Errol’s a man of vigor. Try after watching his films to not feel inspired to get up and take action, to experience nature, the sea, to take up a fencing foil or bring your girl for a sunset view. Errol bounds off stairwells, leaps onto horses, swings onto ships, so we don’t have to. Errol is always about life, vibrantly living and giving, how great life is, until someone’s cruelty gets in the way, and then we can do something about that. He’s marvellous.

Next week in Part II of this blog, I’ll share my Top Ten Flynn Films to get you started on your course in Errology!