Nine Old Movies I Love to Rewatch at Christmastime 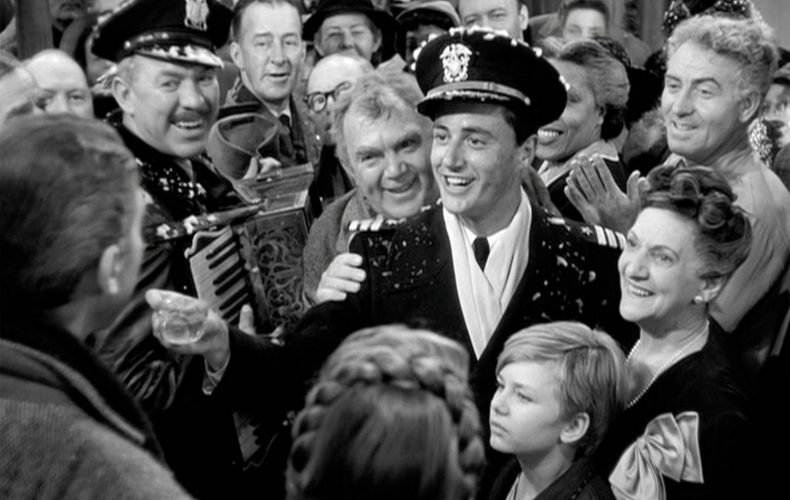 Nine Old Movies I Love to Rewatch at Christmastime

People who know me well know the rather embarrassing fact that ever since I became a budding cinema buff in my teens, I have had one very important Christmas tradition. I sit down somewhere very comfortable, not to be disturbed, with a hearty cup of tea and some tasty biscuits (let’s say a mint Viscount), a fresh highlighter, and the holiday double edition of the RTE Guide (Ireland’s version of the TV Guide) and proceed to go through all the movies on TV over the Christmas period, and highlight the ones I’m planning to watch.

Now in the modern era where you can find almost any movie in two clicks online at places like Amazon or Hulu, this is rather redundant. But when I was growing up, the British and Irish TV stations (RTE, BBC, ITV, Channel 4) would pack our their schedules, from early morning to late night, from around December 22nd to January 2nd, with loads of movies. Some would be a two-year-old cinematic release getting its TV premiere, some would be much-loved family favourites, some would be obscure greats of old cinema not shown at any other time of the year. A chance not to be missed to see that Preston Sturges or Alfred Hitchcock or Howard Hawks I’d not yet seen. I can vividly remember staying up til 2am to swap in a second 180-minute VHS tape in order to be able to tape all of the 4-hour Once Upon a Time in America, and getting up at the crack of dawn to record Charlie Chaplin shorts.

So even though a huge range of movies are now at the tips of our fingers, I still look forward to arriving home to Ireland and amidst battling jet-lag, my auld tradition of sitting down with the RTE Guide, and highlighting a few great old movies to watch (“oooh, they’re showing Only Angels Have Wings on St. Stephen’s Day …”)

In celebration of that, here are nine movies, some festive, some not so much, all of which I have watched multiple times, that if I come across in the TV listings this Christmas, I know I’ll find hard to resist, and which make for perfect viewing with popcorn, hot cocoa and way too many chocolates …

Category: The Christmas Unmissable (that you promise won’t make you cry this time around.) 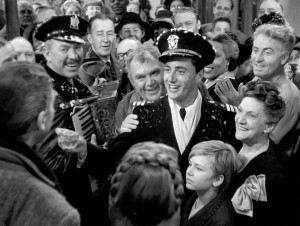 Well, let’s start with the obvious: if you aren’t watching It’s a Wonderful Life over Christmas, what are you watching? The great thing about it is that, yes, it’s about community coming together and the unglamourous impact of one man (the scene where the townfolk come in with the collection … ay carumba, I’m getting a little weak behind the eyes just thinking about it), but it’s actually deeply unsentimental because behind the Capra-corn Americana, this is actually a film all about hopes dashed, not fulfilled, it’s dark, and that’s why the pay-off is so marvelous. Indispensable.

Alternates in this category: No other Christmas movie quite twists my tear-ducts like the tale of Bedford Falls, but To Kill A Mockingbird and Field of Dreams also threaten my manly reserve.

Category: An Old Hollywood Classic of Endless Pleasure (that you haven’t watched in … at least a year). 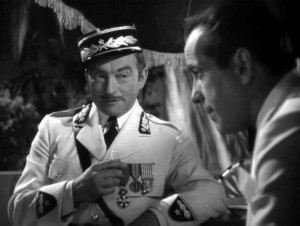 Maybe it’s a cliché for me to feel this is just the greatest movie ever, but every time I watch it, it gets me the same way and yet I find new moments of pleasure in it. The dialogue is zippy perfection; I’m utterly a sucker for Rick’s Cafe filled with every European nationality (not just the delightful Claude Rains and the marvelously cutting Conrad Veidt but also the glorious Warner Bros character actors troupe including droll Sydney Greenstreet, squirming Peter Lorre, cuddly S.Z. Sakall, et al). I get a lump in my throat when Rick cheats the roulette game, I plain-out cry at La Marseillaise, I get drunk in the shadows with Bogie. When you know you want simmering joy with no chance of failure, it’s got to be Casablanca.

Alternates in this category: Stagecoach, The Adventures of Robin Hood, Some Like It Hot. 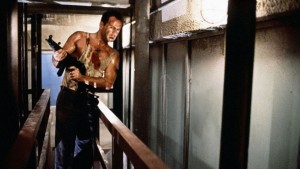 Die Hard is the must in this category because (a) it is totally Christmassy and (b) it is the greatest action movie ever made. Bruce Willis has never been better (he’s never been quite as brilliantly vulnerable as that moment he gulps and knows he has to walk over the broken glass in his bare feet), still nobody has mastered Brit-elegant villainy with the panache of Alan Rickman, and just structurally it’s as tight at the Nakatomi building security, and there’s no action movie that is this witty (Johnson and Johnson the FBI agents!) Yippee-kiyay!

Category: The Ray Harryhausen Ancient Myth Adventurer (to be watched while eating a late loungy breakfast with your brother) 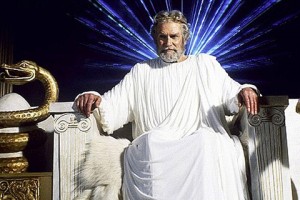 Oh, Ray Harryhausen, how you created the dreams of my childhood. I would still choose his jerky but dreamily tactile stop-motion creatures over any billion-dollar CGI. Those sword-wielding skeletons, genuinely scary Medusa, his rusty bronze Colossus. These glorious, elegant technicolor movies filled with everything a little boy wants in a story – adventure, monsters, damsels, sword-fights, purple mist, ships at sea, and the Gods playing chess with human lives. Clash of the Titans jumps to the top of the list because (a) I always felt if I had been born in Greek myth, I would have been Perseus and (b) the mighty English actors playing the Gods with Shakespearean juiciness. Laurence Olivier as Zeus, I rest my case.

Category: The World War II Star-Packed Technicolor Beast (that your Dad might join you for some of.) 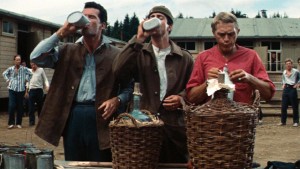 If I haven’t watched Nazis getting defeated by Old Hollywood stars, it’s not a complete Christmas. Steve McQueen bouncing his ball (how does he get to wear jeans in a POW camp?), culture clashes but ultimately cross-nation camaraderie, some failed escapees (to keep you on your toes), smuggling sand in trousers, and motorcycle jumps. Far too long and matinee perfection.

Alternates in this category: The Dirty Dozen, Where Eagles Dare. For the cynical: Stalag 17.

Category: The Actually-Good Romcom (that’s perfect for snuggling to on New Year’s Eve when you are avoiding parties). 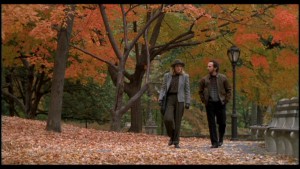 I adore When Harry Met Sally. For years after, I watched Billy Crystal and Meg Ryan in loads of other movies, hoping for that recapturing of magic. It’s a brilliant script (“and Baby Fishmouth is sweeping the nation?!”), Bruno Kirby and Carrie Fisher provide delightful support and make it into an absorbing 4-hander play, and I don’t think any Woody Allen movie captures Manhattan quite as well (I think it’s a very powerful subliminal reason I moved to New York City). Dare you not to get goosebumps when Billy stops window-shopping and starts running through the New Year night. 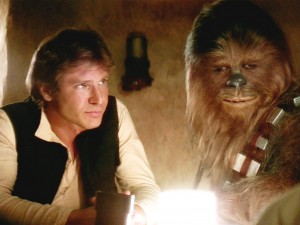 Growing up, the only time you could see Star Wars (before my godmother gave it to me as my first ever VHS tape … long before we had a VHS player) was on TV each Christmas. I can remember after seeing Return of the Jedi in the cinema as a 9 year old, trying to compute how many Christmases it would be before they would be showing it on TV. And this year, I’m going to see the new Star Wars film at Dublin’s Savoy Cinema, where I saw the original trilogy, and I’m schoolboy-giddy.

Alternates in this category: Uh, Empire and Jedi. If your only option is Episodes 1-3, watch Raiders of the Lost Ark or Back to the Future. Some people might suggest The Lord of the Rings but, really, lads, c’mon, not in quite the same class at all.

Category: The (not-really-very good-but-you-kinda-love-it) Soppy Modern Addition to the Canon. 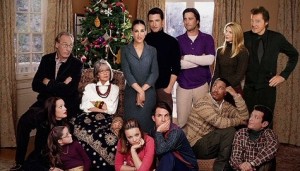 I was doing the play The Miracle Worker in small-town mid-Massachusetts in the winter of 2005, and on a two-show day, the cast drove to the multiplex, and there was nothing to see. I said, oh well, look, I’ll kill two hours watching this Sarah Jessica Parker / Diane Keaton romcom. But I totally loved it. The performances are lovely across a really strong ensemble cast (I love the scene with Craig T. Nelson and Luke Wilson out on the freezing bleachers) and I don’t know, it just captures a family seasonal regathering truly; it snags me. I showed it to my mum last Christmas, and she was … ho-hum about it, so any claims it’s a movie ladies would love goes out the windrow, but rewatching a second time, I still totally dug it. I think I identify quite a bit with the Dermot Mulroney character, I don’t know what that says about me …

Category: The Bit of Cartooning Brilliance (that you have on and pretend some child is watching.) 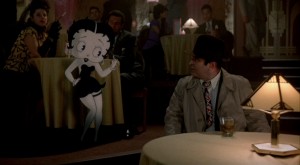 You have to watch one cartoon over the festive season, and maybe it’s my love of Golden Age Hollywood, but Roger Rabbit is a major favourite of mine. Yes, the acting of Bob Hoskins opposite the drawings is terrific, but really what makes it last is how macabre and sleazy it is! The whole thing is brilliantly balanced on the knife-edge of going too far and ruining your childhood memories; Zemeckis is just so darn clever. And yes, I totally fancy Jessica Rabbit.

A Merry Christmas everyone and happy watching!