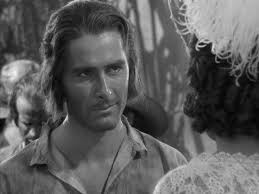 Last week, I put forward the case for Errol Flynn’s brilliance as a movie star.

Now here’s my little gift to you – a starter course of Ten of the Best of Errol’s Films. Pick out a few weeknights and a couple of Sunday matinees, and I believe within a few weeks, you’ll be in the Errol Club too (it’s great fun there, as you can imagine …)

Captain Blood (1935): Start with Errol’s astonishing breakout film, as an unjustly imprisoned doctor turned swashbuckling pirate, and straight away we get Olivia de Havilland, Basil Rathbone and Lionel Atwell. Watch out for an early scene when Blood gets slapped across the face when he resists being a slave and see the boiling fury in Errol’s eyes …

The Adventures of Robin Hood (1938): Maybe the greatest adventure film ever made? I could watch the scene when Robin carries a deer into King John’s banquet a hundred times. “Sir, you speak treason!” “Fluently!”

The Dawn Patrol (1938): This is an ace and moving story of bravery, respect and camaraderie, the best movie Howard Hawks never made, about the pressure cooker of British WWI pilots going on suicide missions. With the bonus delight of seeing Errol’s real-life pal David Niven alongside him.

Dodge City (1939): Errol is terrific in his endlessly charming and engaging cowboy debut, as a trail boss forced to pin on a badge. Including possibly Hollywood’s greatest barroom brawl!

The Private Lives of Elizabeth and Essex (1939): Errol strikes sparks with the fiercely intelligent Bette Davis, in a great example that Errol was not just dashing, but also could play political drama. Even the doubtful and harsh critic Davis was to say “Damn it! The man could act!”

The Sea Hawk (1940): Maybe even better than Captain Blood, this glorious sea-tale features Errol as Capt Geoffrey Thorpe, who goes from commanding a 40-gun galleon to enduring and escaping captivity, in a story packed with political intrigue and terrific action. Recently, I had some friends over who rarely watch old movies, and they suggested I pick a movie at random to watch: I nabbed out The Sea Hawk. They adored it …

They Died With Their Boots On (1941): While maybe more a glorious than historically accurate portrayal, Errol is terrific and moving in this thunderous tale of George Custer, with a deep cast including Arthur Kennedy, Anthony Quinn, Sydney Greenstreet and Hattie McDaniel.

Desperate Journey (1942): A much underrated tense adventure as Errol leads the crew of a crashed bomber plane carrying top secret intelligence back on foot through WWII Germany. Errol even seems to bring Ronald Reagan to life in this!

Gentleman Jim (1942): Errol is fantastic as bare-knuckle fighter Jim Corbett in this hilarious, rambunctious boxing tale, so bursting with life, I don’t care about the Irish clichés!

Uncertain Glory (1944): Flynn creates an intriguing character in Jean Picard, a career criminal being led to the guillotine, who offers to exchange his life for 100 prisoners set to be executed by the Nazis. Errol plays the part with enigmatic elegant charm, grim bravado, gallows humour and growing pathos.

And this list leaves out gems including The Charge of the Light Brigade, Objective, Burma!, The Prince and the Pauper, Edge of Darkness and The Adventures of Don Juan.

You may not have discovered all these treasures, but in a very Flynn way, they’re a great adventure waiting to be had …