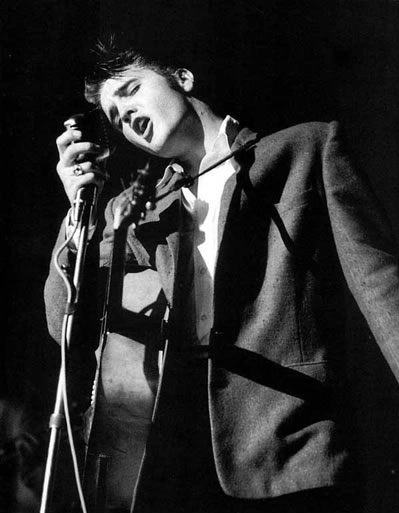 One evening in the summer of the year 2000, I walked into a record store with a little exercise for myself – to walk out having purchased albums by three artists I’d never bought before. I did pretty well, looking back. I bought Astral Weeks by Van Morrison, a gorgeous album, whose backstreet poetry and elegiac songwriting I still find haunting. I bought Kind Of Blue by Miles Davis, which of course I know now is maybe the greatest jazz recording of all time, just pure magic of atmosphere and the coming together of ludicrous talent in one band. And the third album: a 3 CD pack entitled Artist of the Century. Featuring the songs of Elvis Presley. Now of course, I knew basically who Elvis was – as a pop culture figure, it’s like saying you’d never heard of Einstein or Picasso or JFK. The boy who brought rock ‘n’ roll to TV audiences with his scandalously swinging hips, the envoy (or thief) of black men’s hot music, the woeful and wasted movie-star of teeny-bop beach movies, the bloated has-been in cheesy jumpsuits in Las Vegas, the hamburger and peanut-butter sandwich munchin’ mama’s boy, and long-dead ex-husband of the foxy actress in The Naked Gun. Who sang Hound Dog and Burning Love and Love Me Tender, and other singles I’ve heard a thousand times over supermarket tannoys. Elvis has left the building. A-huh-huh. Thank you very much.

So why the hell I did pick up three CDs of this rock ‘n’ roll cliché, sharer of faux-Nighthawks cartoons with James Dean and Marilyn Monroe, when I could have bought Nirvana or the Rolling Stones or the Prodigy? Because some part of me was just darn curious as to why Elvis was this icon. And once I started listening, I got it. I was bitten by the bug. I became enchanted with this heroic singing voice, this arranger of beautiful music, this charmer of depth, truth and skill. As I listened to his twenty-year range of music, I had different phases of love: initially I was a stalwart for the familiar early 60’s RCA output, the venerable hit singles – Are You Lonesome Tonight, Can’t Help Falling in Love, You’re the Devil in Disguise. Then I discovered the breakthrough Sun records, in all their raw, untampered glory – atmospheric, sweaty and gutsy, Mystery Train, Good Rockin Tonight, That’s All Right. I was too cool for school to appreciate the 70’s stuff, all brass and big … until I watched the ’68 Comeback Special, and was blown away. And suddenly found the hair being brought up on the back of my neck by If I Can Dream, Always on My Mind, An American Trilogy. Now I’m just a completist, lapping up every minor record and B-side and live bootleg. (Maybe someday I’ll be mature enough to appreciate all the movie soundtracks!) I’m a long-time unapologetic Elvis aficionado, the kind of man who could get into three-hour arguments in bars with people questioning his importance compared to Jay-Z or the Beatles or David Bowie (all great too, but there are princes … and there’s the King.) I can talk treatises on how I think Elvis Country is as great a concept album as Pet Sounds. I can drive at night for an hour or two, happy with just the company of streetlights and the moody darkness of From Elvis in Memphis. And yes, there’s only one artist I have to try and mimic when I sing karaoke (I’m definitely not the worst impersonator …)

So you’ll get that I think Elvis is majestic. But why? What is it about him? Sure, he’s got an incredibly rich voice, with range and control and power and specificity, a gorgeous instrument, a gift from the gods (that he took pretty great care of and nurtured and trained). But then so did Freddie Mercury and Ella Fitzgerald and Robert Plant. And he didn’t even write his own songs, not like Springsteen or Dylan or Michael Jackson – Elvis just interpreted and arranged (and pretty much produced) them. Yeah, just. He just happened to be a massively music-smart arranger who knew exactly how to tell a story with the material in front of him, and had glorious taste for a memorable melody and punchy lyrics. But then so did Frank Sinatra and Aretha and Sam Cooke. And he has no cool factor – compared to Jim Morrison or Johnny Cash or Eminem, he’s rather hokey and sweet and old-fashioned.

No, what makes Elvis extra special is the depth of his work, which I think is one reason he’s so stirring and appealing to me, being an actor. With every song he sings, not only does Elvis see the story in the song, its arc and scenes and changes, but he reaches deeply into himself, into his understanding, his empathy, his heartbreak and soul-strength and cruel-memory, to share with unremitting generosity a level of bare-hearted vulnerability that risks every sharp blow, that conjures each moment of pain, of grief, of bliss, of sacrifice, of sharing, of pride, of shame, of wonder, of joy, and gives it to us with every sinew of his muscle and might. And he does so in a way that combines confidence in his capacity and joy in his talent, a rigorous understanding of the destiny of his skill, with an “aw, shucks” humility that knows it all comes from some God above, some muse, some shard of luck and something much greater than I, that laughs off fame and over-regard, and even amidst cadillacs and private jets, reveres the ordinary human life, in all aspects of its tragedy and comedy. This is in every Elvis performance, bar none. That is the greatest glory of the man – that he shares his incredible musical gifts with such depth of generosity.

I hadn’t realized this until taking a trip to Graceland. I loved walking in Elvis’ footsteps, in his ultimately rather cosy and charming mansion with its working kitchen and silly-ass Jungle Room and multi-TV basement den covered in TCB thunderbolts (and a supremely cool mirrored staircase). I got such a vibrant kick from seeing the black leather suit from the Comeback special in the flesh. And gaping at all those gold records on the wall is quite a knockout. Then, when I walked outside and stood by Elvis’ grave, I was stunned to find myself in floods of tears. But they weren’t so much from grief at losing him so young or any aspects of the tragedy of his life, like the divorce or the drugs or that he never really lost the insecurity of impoverished, shy youth. No, I realized clear as a bell, after being surrounded by the catalogue of his life’s work, that I was crying from awed thankfulness at the generosity of the man, of just how much he gave of himself as an artist. The depth of that giving, to us the listeners.

Up there in Heaven, Elvis (which I’m sure is a Christmas party singalong at Graceland), I salute you. Thanks for sharing your gift with us so readily and bravely, and reminding the rest of us actors and performers to give of our gift as generously and as courageously as we can. Thank you very much.