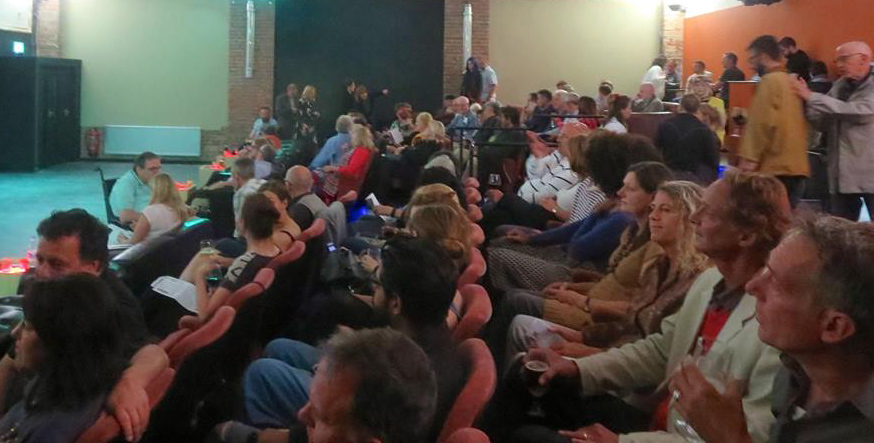 Okay, I admit it, I love audiences. Well of course I do, as a theatre actor, they’re what makes the show – and what in the world is better than a crowd of people snuggled together, excited for you to step into the light and tell them a story right there and then, maybe one they’ll never forget. It’s an amazing feeling, privilege and duty. And I am always so thankful for each and every one who turns up.

I love audiences before the show. I adore the “hub-a-bub” before a play. I remember distinctly doing my very first proper play at school – Juno and the Paycock, I played Johnny so I was in the opening scene – and was waiting on stage behind the closed curtains as the audience gathered. To hear the whispers and chuckles of people coming in, the squeaking of chairs being sat in, the rustle of programmes, and how that all built and built into a buzzing hive of pure anticipation, just beyond that curtain, was so thrilling. I never wanted to talk to anyone in those precious moments before the show, I just wanted to listen to them all come in. Even now, I love doing the final stages of getting ready in the dressing room, to the crackle and hiss of the intercom playing the audience arriving and settling in. That warm, lovely, chocolatey hub-a-bub.

I love audiences during the show. I am fascinated by their combination of goodwill and honesty. At the start of the show, you have more than a blank slate. They actively, eagerly, optimistically want the show to be good, to have a great time … but they can’t hide the fact if it’s not. Those lovely signs of enjoyment – laughter of course, but also the pin-drop silence of an audience wrapped up in what will happen next? And maybe best of all, a gasp at a revelation in the story. Then you know you’ve got them and they’ll walk home talking about it, and probably tomorrow morning too. I also love when audience members respond vocally to the story – now some actors find this annoying, but to me, it’s joyous. For example, when I was doing The Beauty Queen of Leenane in Connecticut a few years back, my character Ray has to deliver a letter to the woman his brother loves, but her mother is the one there, and she only wants to keep her daughter for herself. Now, especially on Wednesday matinees, when coachloads of older ladies would be our main audience, as my character wavered over whether to give the letter to suspicious old Mag, I would clearly hear “Nooo! Don’t give it to her! She’s gonna burn it!” 1% distracting, yes, but 99% just wonderful (and they were right too, she did burn it …)

And of course, all actors love a full house – it’s a reassurance of why we’ve put all that work in, that someone wants to see it. But sometimes, even a small house can be brilliant. I remember one night, in the early days of our theatre company AboutFACE, we were producing a show and on a midweek night of particularly nasty winter weather, our stage manager came into the dressing room to tell us we only had two in the audience, both comps, two directors. Should we offer them to come back another night and cancel the show? We made the offer but also said we’d be happy to do the show, even for just two of them. They both said they’d prefer to stay and watch the show. And the two of them, previously strangers, sat together, and we had a great performance, intimate, fresh, specific, one of the best of the run. And the two guys loved it. As you can see, I’ve never forgotten it.

And I love audiences after the show. The bow is a very special moment. I read recently that the bow is not about the actors taking praise, but actually about showing our awe for the audience, bowing to them (I like that, “awe-dience”) and I think that is very true. Which is why I despise sloppy curtain calls, with apologetic faces – that is just plain disrespectful to the audience and deeply unprofessional, methinks. And it is such a gift the audience gives, for one to see, hear and feel that honest appreciation – and you do feel it, the thunder of those claps coursing through the air, it’s tactile, it’s human connection. And personally, I am a big fan of encore bows when an audience really valued the show, where you go into the wings and audiences keeps clapping until you come back on. I was actually surprised by one in the last show I did, in England, on our last night of The McGowan Trilogy. The cast all came off-stage, and were hugging and back-slapping as one does on closing nights, when suddenly our house manager said, “They’re still clapping, go back out there!” And we were standing backstage, missing it! We were so lucky – we had gone offstage in a daze, wrapped up in ourselves, and yet they kept clapping until we ran back on, and then they applauded more and harder. It was powerful. And it made me think of a moment where I was deeply moved recently, being at a performance at La Comedie Francaise in Paris. At the end of that show, the French audience clapped and clapped, and the actors came back on stage for an encore bow … and went off, but the audience kept clapping, so they came back for a second encore bow … and then for a third … and a fourth … it went on and on, for I think six or seven bows, I lost count, the audience refused to stop clapping, refused to release the actors from their grasps, they were that appreciative of the sweat and tears and heart and skill they had just given, it got to the point where the clapping had moved into a sweet unison rhythm, and some of the actors were in tears of disbelief, it makes the hair stand up on my head thinking of it. Isn’t that magic?

So believe me, I count myself very lucky to be an actor in the theatre. And I bow to every last one of you.