The Cinema of Camaraderie – Howard Hawks and Good Gangs 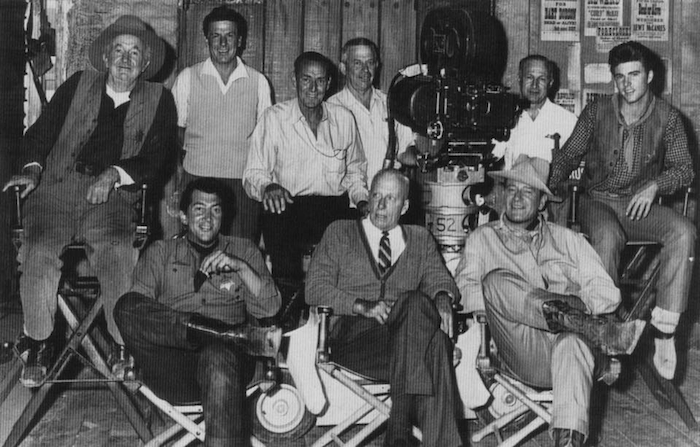 The Cinema of Camaraderie – Howard Hawks and Good Gangs

I recently started watching The West Wing for the first time. It was one of those nights when we didn’t have a show to watch, and flipping through Netflix, we thought, why not just watch one episode of this.

Now 20 episodes later, I’m rather hooked, and delighted there are another half-dozen seasons to watch. Why am I enjoying it so much? Yes, Aaron Sorkin‘s fast-paced dialogue is sharp and delightfully witty, I am completely aligned with its humanist and liberal values and morals, it is fascinating to watch the inner sanctum process of the Oval Office, and Martin Sheen is the Irish-American President I’d be happy to vote for (if this Irishman was an American citizen). And that’s all part of it. But ultimately what keeps me coming back, what makes me gleeful about the show, is that it is essentially, moment-to-moment, a story about camaraderie.

That is one of my absolute favourite subjects for stories. The gathering of a bunch of rag-tag, mismatched characters, in a tightly-wound tense environment, doing their best against sticky odds. They love what they do. They tell terrible jokes. They get on each other’s nerves. They argue over the only way to do things. They over-reach in over-confidence and make mistakes that could bring the roof down. There’s the firecracker tension of romance but never without a fight first. Tragedy happens, old flames return, breakdowns occur, secrets are torn open, and all of a sudden, that character who walked away in a huff is back giving a hug and saying it’s going to be okay. It’s what it’s like to be in a good gang, and to me, when you squeeze a bunch of colourful characters into an inescapable pressure-cooker, you get an endless source of comedy and drama.

And the key to that is that it is all about interaction. This is one reason one-person shows never get me going as much as a multi-character play. Because that energy, that spark, that chemistry between two or more people in a complicated room is so interesting, so present, so of the now. And it produces action, reaction, and juicy, snarling, playful, revealing, flirtatious, damning, delirious, gorgeous dialogue.

Many of my favourite stories are about these little packs of misfits trying to save the day and finding strength personally and together from that struggle. You can find it in Greek comedy, like The Swaggering Soldier by Plautus. Shakespeare’s plays are loaded with it, and is a key part of his genius. Much Ado about Nothing and Twelfth Night are personal favourites, but is not also the most delightful part of Henry IV the pub gathering of Falstaff and co? Golden Age Hollywood is packed with lovely examples (maybe subconsciously because all those writers and directors were packed tightly together in the studios). John Ford‘s Stagecoach or The Quiet Man. Preston Sturges‘ comedies like Sullivan’s Travels. Errol Flynn‘s many adventures with his salty pals, most obviously The Adventures of Robin Hood, but take any of The Sea Hawk, Objective Burma, Desperate Journey, Edge of Darkness. Why do we love The Great Escape or The Italian Job?

And the master of them all, Howard Hawks. There is no better man at telling the story of a bunch of grumpy, sharp-tongued, frightened-but-brave men and women gathered together and making a scrap of it (while also tangling with each other). How I just plain adore Rio Bravo, Only Angels Have Wings, His Girl Friday, El Dorado, Red River. Endlessly rewatchable.

And in modern times, really isn’t what we love about Star Wars the little quarreling gang of Luke, Han, Leia, Ben, Chewie, R2, Lando and Threepio? Yes, the sword-fights, aerial battles and Jedi mystery are crucial too, but isn’t it that element of sparky camaraderie which was so vitally missing in the three prequels? I even love stories of camaraderie with a melancholy edge, like Diner or The Big Chill.

And three of the key moviemakers currently working are clearly devotees of Hawks. Aaron Sorkin is practically writing zinging scripts for Hawks to direct – go back to A Few Good Men or the recent Newsroom. It’s no surprise to me JJ Abrams restored life to the new Star Wars film, because Lost, which I ardently followed, is just a story of camaraderie (the island is merely the device that forces them together) and what he brought delightfully to the new Star Trek was that great feeling of a pugnacious gang on the Enterprise. And it made perfect sense to me when Joss Whedon made a movie of Much Ado. His great successes, like Buffy and Firefly, use spaceship trucking and small-town vampires as an excuse to gather his gang together and give them great lines to handle the craziness. To me, though I am sometimes bored by the CGI explosions and debris-smashing in his Avengers movies, I always enjoy the team being gathered and squabbling. (Read his Astonishing X-Men comics to see this done utterly brilliantly.)

And yes, I know these are all just substitute families, and really one should grow up, and prefer stories of the lone man staking his claim, but sue me, I like making something happen surrounded by my friends.

For me, doing a cracking play with a theatre company of good eggs, or working on a small-set film with a spirited cast and crew, all striving to make something excellent, is that in real life, and there’s nowhere I’d rather be. I’m sure everyone has their place like that, their sports team, their start-up company, their house-building charity, their role-playing group, their pottery class, their plane-spotters club. And if you don’t, maybe you should. Hey, it’s not always easy, but it’s always interesting. And you might make some comrades.